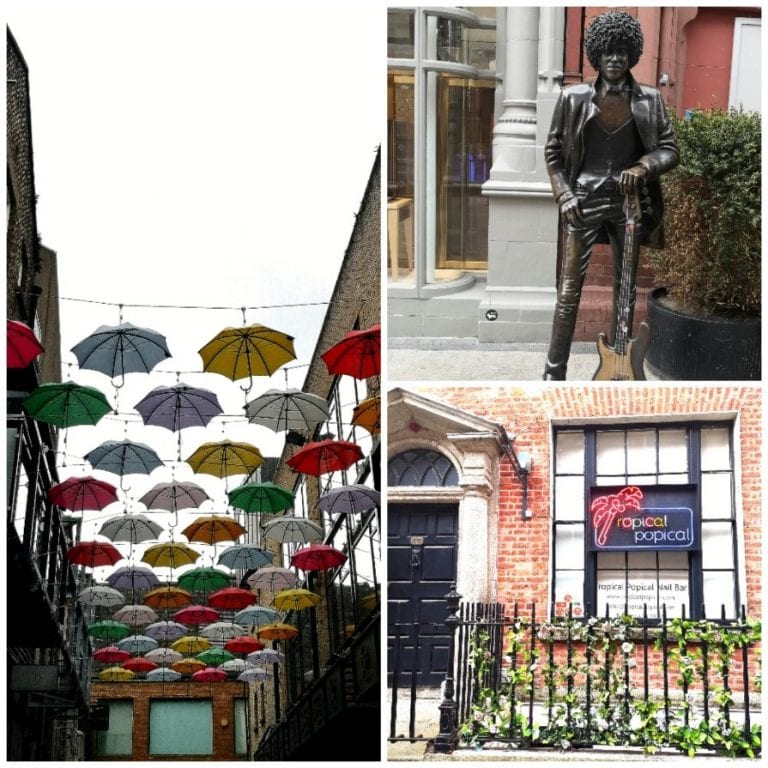 Dublin is a walkable city. It’s flat, compact, and friendly. It’s an old city, built around the designs of a medieval town where walking and travel by horse and cart were the only modes of travel.

Today walking still is the best way to get around with the added advantage of the Luas. My advice (unless you’re heading out to Guinness or Phoenix Park) is spend your Luas money on coffee stops to sit and watch the world go by, while you rest between walks as Dublin has a café on almost every corner. 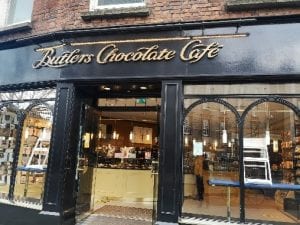 Time spent on this walk depends entirely on you.  It can be completed in 2 hours if you want to get a feel for the city or you can spend all day at a leisurely pace exploring as you go and visit some of the attractions on the way.

Once you leave the Gibson Hotel follow the Luas line up to our first stop, as you walk along this route you will pass the iconic 3Arena, and also witness the revival of this area through the many new buildings popping up along the way. There are also some local residents keen to stay and their houses look like they have been squeezed in to fit this new landscape.  The back of the convention centre looms as you pass over the royal canal, a canal made famous in a song by our first stop – the Luke Kelly statue. 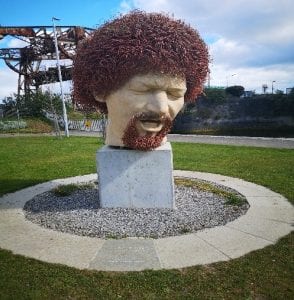 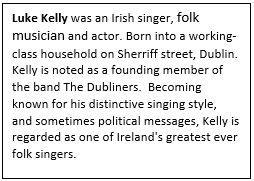 Walk down Guild Street out onto the quays and turn right walking past a series of dedications to the famine in Ireland, the Jeanie Johnston, EPIC Museum of Irish History & the Famine Memorial.  You will also get a glimpse into the IFSC which is the financial district of Dublin but also bustling with cafes and lunch spots. 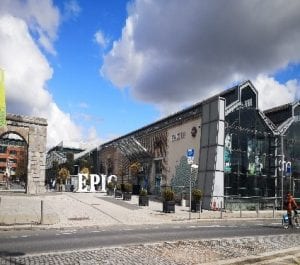 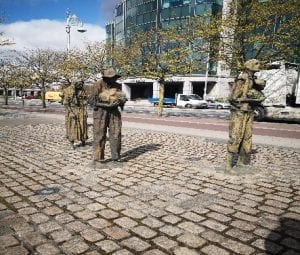 As you continue on, you’ll pass the Custom House – regarded as one of the jewels in the city’s architectural crown. A masterpiece of European neo-classicism, it took 10 years to build and was completed in 1791, The building was burnt to the ground on 25 May, 1921 during the Irish War of Independence; restoration work was completed by 1928. To your right is Tara Street Bridge (look out for the DART) and Liberty Hall, home of SIPTU (the largest trade union in Ireland) but is more historically significant in its earlier form, as the headquarters of the Irish Citizen Army 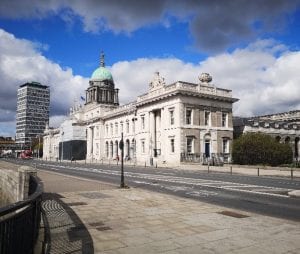 The boardwalk stretches along the Liffey once you cross the bridge and is nice to watch the kayakers & the Liffey cruise sail by. 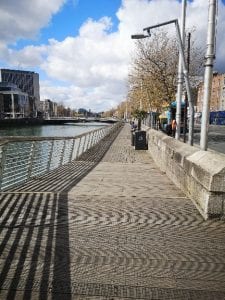 You’ll then come to O’Connell Bridge & Street – a large thoroughfare which has been the backdrop of several political events over the years and remains today the starting point of public protest and demonstrations, stop by the GPO where the leaders of the Easter Rising occupied it and made it their headquarters during the 1916 insurrection. Bullet holes can still be seen in its Georgian facade. The museum tour is also available and is worth a visit. 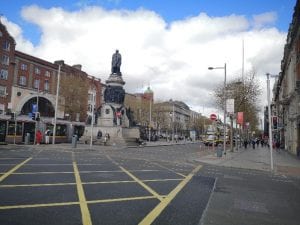 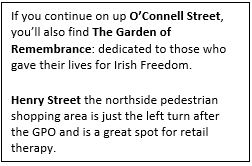 Once you’ve taken all that in, continue on down the Quays and you will come to the Winding Stair Restaurant and bookshop or The Woollen Mills which is owned by restaurateur Elaine Murphy, who promotes traditional Irish recipes made with local produce in all of her venues. 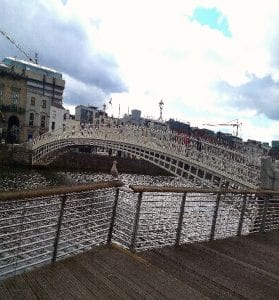 Cross the iconic Ha’penny Bridge (as it once cost this much to cross) – a selfie is a must but relish the challenge- it can be a busy spot at times!

Head through the archway and find yourself in Temple Bar – the most photographed part of Dublin – famous for its colourful pubs and Irish music pouring down its cobbled streets. 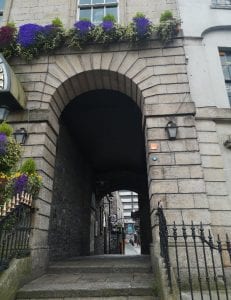 As you pass through Curved Street on your way out of Temple Bar why not visit the Irish Rock n Roll Museum experience walk off the street and onto the stage with a top of the range immersive and theatrical rock ‘n’ roll experience.

Before heading up George’s Street look to your right when you hit Dame Street and you will see the entrance to Dublin Castle – a wonderful piece of Georgian architecture dating from the 18th century –paid admission but you can stroll around the upper courtyard for free.

George’s Street has some amazing restaurants and bar’s including The George – an iconic bar which is the heart of the LGBT community in Dublin.  Restaurant’s Fade Street Social and The Rustic Stone, both owned by celebrity chef Dylan McGrath and cover all budgets. Grogan’s Pub which has been a favoured meeting place for cutting-edge Irish writers in the 70’s (Patrick Kavanagh and Flann o Brien frequented, to name a few). 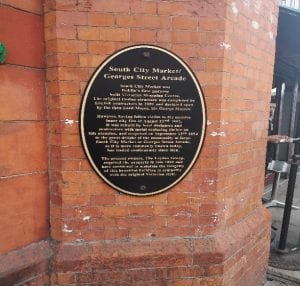 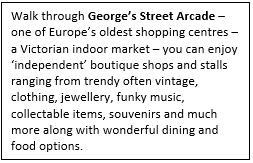 Walk up William Street where you’ll find at the top another nod to the great Luke Kelly as you turn the corner to the wonderful Gaiety Theatre.  Each summer The Gaiety welcomes the world-renowned shows including River Dance.  You’ll also find Stephens Green Shopping Centre and the entrance to St. Stephen’s Green itself – which is Dublin’s largest Georgian garden square and is a respite from the bustling city. 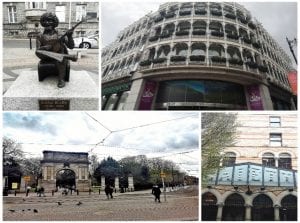 Grafton Street sits at the top of Stephen’s Green and is Dublin’s main shopping street. Home to high street brands but also some very high-end luxury. If you’ve time Brown Thomas is an oasis of pleasure to spend an hour in. 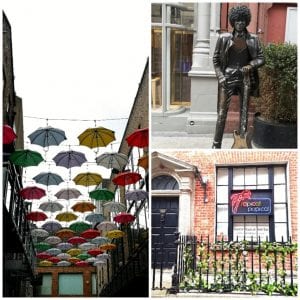 If you continue on down Anne’s Street, you’ll come onto Dawson Street, where you will find The Mansion House, residence of the Lord Mayor of Dublin.  Here you will also find St. Anne’s Church. 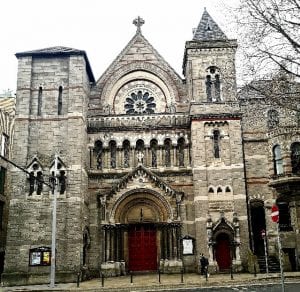 This street is also famous for some trendy bars and restaurants, The Ivy & Café en Seine are a few local hot spots topping the list.

You can turn off Dawson Street and walk down Molesworth Street onto Kildare Street where you’ll find Leinster House (Seat of the government of Ireland) and the National Museum of Ireland.

Or turn left at the bottom of Dawson Street and you will follow the wall of Trinity College Dublin which goes right around to its front entrance on College Green.  Trinity College Dublin was founded in 1592 by Queen Victoria 1, and is Ireland’s oldest university and probably most prestigious. You can roam the grounds for free but visitors will have to pay an admission fee to see the Book of Kells or the Old Library. 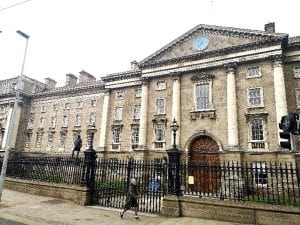 If you continue on down Pearse Street you will come to The Science Gallery which is part of Trinity College Dublin and is and interactive gallery which encourages young people to engage and learn through their Interests. 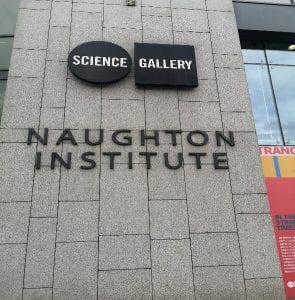 Take a left on Lombard Street, follow the road to the river and the Sean O’Casey foot bridge.  Cross over the River Liffey and you are back at EPIC where you can look towards Dublin Port and then enjoy the rest of the walk back to the gibson hotel. 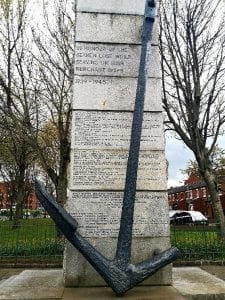